No previous Government in India is exempted from any severe allegations on conducting immoral business practices, scams, scandals and creating rifts in the social-economic layers of our country. Narendra Modi let BJP Government is no exception as well. Below are just the Top ten scandals that are being discussed by Media and public. We will leave it to Time to judge the parties, business men and corrupt officials and take action appropriately.

The Rafale Deal Controversy is a political controversy in India related to the purchase of 36 multirole fighter aircraft Rafale from France’s Dassault Aviation. This controversy discusses a multi-year scandal that has been going on for several years even before BJP took the power in hand. The controversy began when questions were raised on why indigenous state-run Hindustan Aeronautics Ltd (HAL) was not chosen to build these flights when Prime Minister Narendra Modi campaigns about Make in India. Also, the fact that Reliance brother Ambani has partnered with the Dassault Aviation. Following the accusations made by Congress Party, BJP took an U-Turn and accused back Congress Rulers whose negotiations with the alleged French Aircraft manufacturer Dassault Aviation. Dassault Aviation has however denied these accusations. Time will uncover the truth.

Rs 77,000 cr Bank loan fraud took place under Modi Government. This is something as common public, we all can understand and relate to as the amount of bank frauds, loan scams torrent on a daily basis in partnership with politicians and influential business magnets. Based on an RTI Plea, it has come out to light that to a tune of Rs. 77,000 Crore worth of Bank Loan Frauds has been reported ever since the Narendra Modi Government took the reign. The RBI response and data only shows that the bank loan and scams have been increased disproportionately under Modi Government. The cases of Nirav Modi and Mekul Choksi are few examples of how influential business people are protected against legal action.

Vijay Mallya was involved Bank loan fraud of INR 9000 and wanted by Govt of India, but he escaped from India to London under Modi’s Government. It has been SIX years since the Bank Loan scandals by Vijay Mallya have been brought out to daylight. But even now he seems to be roaming freely across the Globe without having to go through any legal action. It is indeed surprising how injustice and inequality plays well in the ever-increasing rich poor divide in India.

Diamond Merchant Nirav Modi was involved Bank loan fraud of INR 13000 and wanted by Govt of India, but he escaped from India to London under Modi’s government. With so many properties, jewelleries, bank accounts with crores of money, This influential merchant again has followed the lead of Vijay Mallya and simply waved his hands to the legal institutions of India. Though his properties and bank accounts in India have been seized by the Government that amounts just to (Rs.674 Crore) 5% of his overall scam contribution (INR 13000 Crores). The government has been trying to seek help from foreign institutions to seize his overseas properties and to bring back to India.

INR 50,000-crore scam engineered by a subsidiary of the Adani Enterprises and shell companies by over-invoicing imported power plant equipment that resulted in inflated electricity tariffs. This inquiry was initiated by the Congress Party way back in 2013 to expose BJP Government’s beneficiaries. However the Narendra Modi let BJP Government has been taking it slowly and this investigation will not seem to reach a conclusive stage.

The scam is about awarding of chikki contracts worth Rs206 crore for school children without following proper procedures. These accusations are about the Devendra Fadnavis Government, the Chief Minister of Maharashtra. Till date the accusations have gone diluted and no strong actions have been taken against the state government.

A staggering Rs. 250000 lakh crore by Adani and company is quoted as the reason behind skyrocketing dal prices in India massively. Hoarding Pulse Stocks in Foreign Ports and creating artificial demand in India to skyrocket pulse prices is the chief technique played out in this modus operandi. Imagine the devastating effect for farmers, consumers, poor and middle class families across India. Also importing locally available pulses from Mozambique in bulk for utter cheap prices and selling locally in exorbitant prices is detrimental to Indian Economy.

Purchase of an alleged ‘school playground’ in Kuchwahi, over 500 km from Bhopal. Zubin Irani is the husband of Union Minister Smriti Irani. The land was said to be donated to the Government by an affluent local villager several years back. Until now, the land had been used by the School as a Playground by the school. Now that it has been purchased, strong fences have been laid out in a warfoot basis that started blocking the passage for students and local people to reach the school itself. Lot of fraudulent document forgeries have been taken place in this scam. People outcry have attracted no legal action against wealthy politicians.

The Staff Selection Commission (SSC) Question has been the institution that is given the responsibility of fulfilling government positions for several state and central government departments across the country. The fact that SSC Question Papers getting leaked has become a regular incident raised the question of what kind of scam is going behind this racket. Cancelling exams quoting unrelatable reasons by the SSC, lakhs of aspiring students and candidates have started protesting to normalize the operations of the recruitment board exams. Social Media brought to light many examples of how question papers have been leaked for cash and though media companies have blown it up, till date no severe mandates have been taken on this matter.

BJP-led Madhya Pradesh government Chief Minister Shivraj Singh Chouhan is under scanner for the 3,000-crore e-tenders for its rural water supply in March 2018. Apparently this is a technical scam where they have manipulated the e-tender platform to favor their blessed private companies against public. Though cases have been admitted, the technical vendors behind maintaining the tendering platform have been blamed and as usual Netas have been well protected behind this multi-crore scandal.

There are several more scandals that are being unearthed as usual every day in an average Indian life. Only time has to change where the legal system need to execute criminal punishments instead of inquiring for several years.

The lives of Celebrities are often filled publicity stunts, mysteries, gossips and super drama. It is very unfortunate that the lives of some of the Celebrities end in an undesired manner.

The south born actress who rose to fame in Bollywood, then aged 54, died on 24th February “due to accidental drowning following loss of consciousness”, police said. She was found in a hotel bathtub. Many speculations are circulating in the media. We are yet to understand the real cause of her sudden demise.

Another leading actress from South, who went on to become one of the prominent politician and a chief minister of 5 times for the Tamilnadu State, died in 2017. Jayalalithaa was bed ridden in Apollo Hospitals for more than a month before she was pronounced dead due to health conditions. Still there are inquiries and rumours about her death in the air about possible causes keep us wondering.

Actress Divya Bharti a very popular actress often related to her resemblance with leading actress SriDevi. It was reported that Divya Bharti fell from the fifth floor of her apartment. Police investigated the case but came to a conclusion that it was a suicide. However, there were speculations that her husband Sajid Nadiadwala was the cause of her death. Decades have gone since she died.

Death – The 25-year-old actress, who made her debut with RGV’s ‘Nishabdh’, anging from her ceiling at her Juhu apartment on June 3, 2013. Her mother Rabia Khan alleged that it was not a suicide, and that it was murder. She blamed actor Aditya Pancholi’s son, Sooraj Pancholi, who was Jiah’s boyfriend, for her death. She also produced pages from Jiah’s diary where the actor had written about her unhappy relationship.

Death – The director, actor and producer, who gave us classics like Pyaasa, Kaagaz Ke Phool, Sahib Bibi Aur Ghulam, and Chaudhvin Ka Chand was found dead due to an alcohol and sleeping pill overdose. Dutt was a victim of depression.

Vijayalakshmi Vadlapati, popularly known as Silk Smitha was the sex siren of the South Cinema Industry. The actress died in 1996 by committing suicide. It is said that her alcoholism, failed romances and dwindling finances made her take her own life. Her story was also made into a film. Vidya Balan portrayed Silk Smitha in the blockbuster ‘The Dirty Picture”. 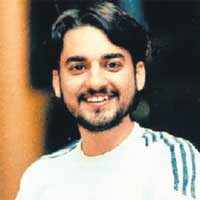 Death – The cute actor from ‘Dil Hi Dil Mein’ was found hanging from the ceiling of his house. However, the actor’s father claimed that it was not a suicide and that his son was murdered.

Parveen Babi was the first Indian actress to grace the Time Magazine cover. The actress was suffering from paranoid schizophrenia and was found dead in her Mumbai flat. Postmortem, the doctors speculated that she starved herself to death.

One of India’s top models died a tragic death, when she hung herself from the ceiling fan in her flat. She had left a diary which eerily said ‘I kill’. It is suspected that a spat with her boyfriend pushed her to the edge.

South Indian Actress Soundarya and her brother Amarnath died in an aircraft crash near Bangalore on 17 April 2004, when she was on her way to Karimnagar to campaign for the Bharatiya Janata Party and Telugu Desam Party candidate for the upcoming elections. She was 7 months pregnant when she died.

Let us pray that their souls rest in peace.

Recent PNB INR 11,300 Crores scam exposes the biggest flaws in the Indian banking system and Law mechanism works. Let us have look at the previous scams that have taught us a lot. Some of these scams have been brought forward to trial and got some justice. Rest of them will run for years without justice.

With many more scams yet to be explored, few immoral Indian Politicians and Business People continue to take their tolls. Let us look forward to read more about newer scams in the upcoming years.